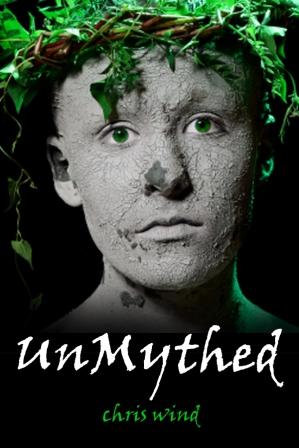 a collection of feminist poetry exposing the myths within the myths – what might Pandora, Circe, Penelope, Eurydice, Persephone, the Gorgons, and the other women of Greek-Roman mythology have thought and done if they had not been the creations of a chauvinist patriarchy?

Available in various eformats (Kindle, Kobo, NookBook, iBook), but you can also purchase it right here:

Available in print as part of Satellites Out of Orbit

An earlier edition in print (perfect-bound softcover, typewritten) is available for purchase ($10.00 + shipping) directly from the author.

“…a fascinating collection of upbeat male/female commentaries based on incidents in the lives of mythological characters. With considerable skill and much care, chris wind has extrapolated truths from mythical scenarios and reordered them in modern terms. An Appendix provides the necessary biographical information pertinent to each poem. Wind handles these myths with wit and intellect. Her voice suggests that the relationship between the consciousness of the myth-makers and modern consciousness is closer than we would think.” Linda Manning, Quarry

“Don’t let unfamiliarity with Greek [and Roman] mythology put you off this one. A full, if biased, glossary is provided, and many of the hero(ine)s have been updated. … It’s doubly ironic in light of the tradition of using the Classics to turn upper-class boys into world leaders. … No footnote is needed to explain “Bellerophon,” for instance. Our collective inability to deal with sex is as obvious today as it was in ancient times: “So the way it’s set up, / I’m supposed to say yes / and she’s supposed to say no / – and that’s rape. // and that’s frightening.” review, unnoted source

“…A welcome relief from the usual male emphasis in this area. There is anger and truth here, not to mention courage.” Eric Folsom, Next Exit

“Personally, I would not publish this stuff. This is not to say it isn’t publishable – it’s almost flawless stylistically, perfect form and content, etc. etc. It’s perverse: satirical, biting, caustic, funny. Also cruel, beyond bitter, single-minded with a terminally limited point of view, and this individual may have read Edith Hamilton’s Mythology but she/he certainly doesn’t perceive the essential meanings of these myths. Or maybe does and deliberately twists the meaning to suit the poem. Likewise, in the etymological sense. Editorial revisions suggested? None, it’s perfect. Market potential/readership targets? Everyone – this is actually marketable – you could fill Harbourfront reading this probably. General comments? You could actually make money on this stuff.” anonymous reader report for a small Canadian press, that rejected the ms

The Gorgons were three sisters (Medusa was one of them) who were monsters with ‘snaky hair, most horrible’; whoever looked at them turned instantly to stone.

it would seem
that nothing is more important to a man
than a woman:
they go to war
because of one
and once there
they fight and kill
to get one:
Agamemnon got Chryseis,
then sulked when the gods said
he had to give her back,
and stole Briseis,
the one Achilles had gotten,
to have instead.

so this is my poem
for you, Chryseis, and you, Briseis
sitting in their tents
trying to understand
how you can be both prisoner and prize,
how you can be sought like gold
but treated like shit.

suddenly it comes to you:
it’s not womanhood that’s being glorified
but manhood—
and proof of the latter is having one of the former

the problem understood
the solution is clear:
establish another proof of manhood.
no, it’s really not so much
a matter of proof
as a matter of definition—

in either case,
it’s out of your hands,
as long as they’re tied.

Agamemnon and Achilles were both members of the Greek army that fought the Trojan War (a war begun over a woman, Helen). A quarrel began about Chryseis, who had been carried off by the Greeks and given to Agamemnon. Chryseis’ father begged for her release but Agamemnon refused. Because this angered the gods (Chryseis’ father was a priest of Apollo), the army chiefs, led by Achilles, persuaded Agamemnon to change his mind. He did so, saying ‘But if I lose her who was my prize of honour, I will have another in her stead’. He then sent two of his men to Achilles’ tent to get his prize, a woman named Briseis. Achilles allowed them to take her, but swore he would have revenge.